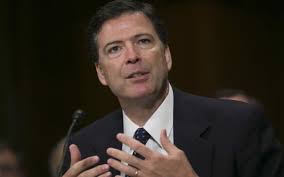 Appearing before the Senate Judiciary Committee, FBI Director James Comey announced that ISIS is using Twitter and encryption to recruit thousands of English-language followers and send out orders. According to Comey, ISIS reaches 21,000 followers on Twitter, some that are then moved onto encrypted messaging platforms as they are pulled into the terrorist group.

“Our job is to look at a haystack the size of this country to find needles that are increasingly invisible to us because of end-to-end encryption,” Comey told the Senate committee. “This is an enormous problem … we are stopping these things so far, but it is incredibly difficult.

This is exactly as I included in my latest book, Bride of ISIS, describing a Colorado Fusion Center’s staff—Homeland Security analysts and FBI agents and analysts working side by side—as they really do, to try to figure out who are the braggarts on the Internet. They struggle and race to sort through them, to determine who is signaling serious intent to move into violent extremism.

One of the best ways to do this is to use tools like University of Liverpool, Jon Cole’s the Inventory of Vulnerable Persons to rate individuals that endorse ISIS to learn what other signs they are showing of vulnerability to becoming violent extremists and then investigate and intervene with the serious ones. This has already been done and works well. Jeff Weyers, a Canadian researcher identified 300 such persons who appeared very vulnerable to becoming violent extremists and turned them over to law enforcement. When investigations were done police found explosives, guns and other evidence of terror plots that were thankfully thwarted.

One of the downfalls of movements like ISIS are that those who get drawn into them often do so because of identity issues. They want to consolidate lagging egos, show their bravado as “men” or purity as women, or be “jihadi cool”. This means that when they begin to go down the terrorist’s trajectory they cannot resist bragging about it on social media—giving out valuable clues to those who can stop them.

Although prevention along these lines also brings up issues of sting operations and potential for entrapment as well as the potential to miss real terrorists who are staging for an attack. In Bride of ISIS, inspired by real cases, one young man is the target of a sting operation and is caught trying to bomb the U.S. Capitol with the help of undercover FBI agents. Troubling to some is that he may have been moved more deeply into terrorism by agents that offered him social and material support for engaging in terrorism—without that he may have remained only a braggart. But without them he may also have carried out a successful and lethal attack.

The main character in Bride of ISIS, inspired by the real case of Shannon Conley, converts and finds extremism on the Internet. Once deep in it she considers carrying out a VIP attack inside the U.S. but decides instead to become a bride of ISIS. The FBI tries to intervene but the agents lack the skills to understand her underlying painful motivations and to dissuade her. Ultimately they lose track and she progresses on the terrorist trajectory. I’ll leave it a surprise what happens in the book. Shannon Conley was arrested.

All of these cases beg the question of what can be done and how can we track violent extremists and figure out who are the dangers?   Just as the problem is complex so are the answers for how we can stop ISIS. A multifaceted approach is needed.

For one, we need hotlines and imams and psychologists that can be called on to intervene early on. Shannon Conley for instance was on the FBI’s radar and agents spoke to her more than once but were unable to dissuade her. Finally her father called and alerted them that she had a one-way ticket out of the country (to hell?) —to join ISIS. Family members often realize when a loved one is radicalizing but they need easier alternatives other than calling law enforcement that can result in something other than arrest—early prevention if possible.

We can also inoculate youngsters against violent extremism by teaching them about violent ideologies in civics classes before they encounter them on the Internet. Giving them a baseline of knowledge and teaching that there is no cause that justifies framing problems and their solutions in violent terms including justifying attacking innocent civilians in terrorist attacks is ever justified—no matter the cause.

Many believe we need to wait for Muslims to delegitimize terrorists claims. In fact we can use our own Madison Avenue persuasion skills to fight the terrorist ideologies. We just need to be as slick, emotional based, knowledgeable and savvy as they are.

And using tools like the IVP we can track and rate vulnerability of individuals moving into extremism and stop them before they attack. The important thing is as ISIS gets more sophisticated, we must have the will and the smarts to get out in front of them and prevent and thwart potential attacks

Anne Speckhard, Ph.D. is Adjunct Associate Professor of Psychiatry at Georgetown University in the School of Medicine and of Security Studies in the School of Foreign Service. She is author of Talking to Terrorists, Bride of ISIS and coauthor of Undercover Jihadi. She was responsible for designing the psychological and Islamic challenge aspects of the Detainee Rehabilitation Program in Iraq to be applied to 20,000 detainees and 800 juveniles.  She also has interviewed over 400 terrorists, their family members and supporters in various parts of the world including Gaza, the West Bank, Chechnya, Iraq, Jordan and many countries in Europe. Website: www.AnneSpeckhard.com