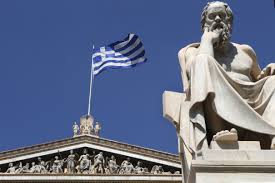 After five years of austerity and facing the equivalent of the U.S. Great Depression, the current Greek government has called a referendum to vote on the EU, Central Bank and IMF austerity measures and bail-out plan, urging votes to say no, or ‘oxi’, to the referendum. While putting the question to the populace, versus having the backbone to make the complicated and painful decision themselves—as the elected government leaders, Greek Prime Minister, Alexis Tsipras, took the easy path—possibly to the great detriment of the Greek people. This amidst banks closing, pharmacies running out of medicine, layoffs and massive psychological chaos.

When facing such a momentous national decision, collective psychology naturally comes into play. Every people has a national ‘story’ and mentality that covers their joint history and particularly their joint honor and suffering. Greeks are no different in this matter. In the case of the Greeks there are numerous factors that come into play in consider a no, or ‘oxi’ vote.

For instance, the Greeks are proud people. They survived four centuries of Ottoman rule without giving up their Christian faith or traditions, carefully keeping Hellenism alive by secretly educating and baptizing their children.

Greeks are immensely proud of being the cradle of democracy, philosophy and ancient civilization. Despite the fact that their recent governments have been known for corruption, Greeks frequently hark back to their collective pride over the historic greatness and achievements of the ancient Greeks.

Saying no, or ‘oxi,’ also has particular significance to the Greek people whose Prime Minister said oxi in 1940 to Hitler’s Axis forces, a historic gesture that is now proudly celebrated annually in Greece and by Greeks around the world in Oxi Day commerations. According to the Washington Oxi Day Foundation the historic significance of Oxi day harks back to when: “The free world watched as one by one countries across Europe surrendered to Hitler’s Axis forces. At 3:00 a.m. on October 28, 1940, a representative of the Axis forces arrived at the Greek prime minister’s residence and demanded Greece’s surrender. The prime minister replied with one single word – Oxi – No. A few hours later, the Axis forces descended on Greece, expecting that it would quickly fall, but the Greek resistance forced Hitler to change his plans. News of Greece’s victory flooded the radio airwaves and covered the front pages of newspapers around the globe. A grateful world celebrated – no one expected such a small nation to derail the seemingly unstoppable Axis forces.”[i]

As a result the Greeks were drawn into the war and suffered massive losses. Churchill credited the Greeks saying, “If there had not been the virtue and courage of the Greeks, we do no know which outcome of World War II would have been.” Stalin likewise stated, “[We] thank the Greek People, whose resistance decided WWII… You fought unarmed and won, small against big…You gave us time to defend ourselves.”[ii] Even Hitler’s chief of staff credited the Greek ‘oxi’ with delaying the German attack against Russia stating, “if we did not have this long delay, the outcome of the war would have been different.”

The Greek Prime Minister’s historic words are still celebrated to this day in celebrations where others are now honored for having the backbone and courage to stand up to dictators and other forms of government suppression, if not outright evil. The words of Franklin Roosevelt are at times read out to in such celebrations, “When the entire world had lost all hope, the Greek people dared to question the invincibility of the German monster raising against it the proud spirit of freedom.”

Greek Prime Minister, Alexis Tsipras in his speech on Friday, July 3, spoke of democracy, dignity and standing up to the European oppressors, urging an oxi vote.

This spirit of resistance and history of Greek defiance in the face of danger from the stronger German powers is what Tsipras is once again invoking in the collective Greek memory. And it’s not hard to do. While the Germans of today are nothing like the Germans of the Nazi era, these collective memories of standing up to Nazi Germany are still alive in Greek mentality and can easily be called up once again.

Greek mythology also harks back to resisting greater powers—even at great cost. Prometheus said no to the all-powerful Zeus, tricking him for the good of humanity. He ended up in chains and daily torment, but was in the end, freed again.

While polls show the vote will be close and a yes vote ascendant, given their collective history, stiff-necked pride, desire for dignity and sheer exhaustion in the face of years of austerity measures that have not delivered freedom, a no or ‘oxi’ vote would not be an altogether surprising outcome from the Greek people.

Anne Speckhard, Ph.D. is Adjunct Associate Professor of Psychiatry at Georgetown University in the School of Medicine and of Security Studies in the School of Foreign Service. She is author of Talking to Terrorists, Bride of ISIS and coauthor of Undercover Jihadi. She is married to Daniel Speckhard, former U.S. Ambassador to Greece, and spent three lovely years serving alongside him in Athens, Greece from 2007-2010.  Website: www.AnneSpeckhard.com